Washington (MEE) – Some members of Congress have expressed outrage over what happened to Saudi journalist.

The United States has for decades turned a blind eye to human rights abuses carried out by Saudi Arabia.

However, since the disappearance and purported murder of prominent Saudi journalist Jamal Khashoggi, who was last seen entering the Saudi consulate in Istanbul on 2 October, US mainstream media, businesses and politicians have denounced Riyadh and questioned Washington’s alliance with the Saudi royal family, in particular.

Various members of the US Congress have also been among those expressing outrage over what may have happened to the Washington Post columnist.

Last week, Dingell was among 27 members of Congress who sent a letter to Saudi Arabia’s ambassador to Washington, Khalid bin Salman, requesting an independent investigation into Khashoggi’s whereabouts.

“We’re going to have to sort this out, but it’s unacceptable – pure and simple,” Dingell told MEE.

The White House, however, has sounded far less alarmed amid a barrage of questions about Khashoggi’s disappearance, what Saudi officials know about it and its close ties to Saudi rulers and the country’s powerful crown prince, Mohammed bin Salman, in particular.

US President Donald Trump has called for people to give the Saudis the benefit of the doubt, stressing Washington’s business and geopolitical interests in staying close to Riyadh.

But Dingell said human rights should not be disregarded in the pursuit of other interests.

“To sit by and watch journalists being murdered, not OK,” she said while noting that the details of the case are not fully known.

Turkish officials have said Khashoggi was killed inside the consulate and accused 15 Saudi men of being involved in his death.

Saudi officials have strongly denied any involvement in Khashoggi’s disappearance and say that he left the consulate soon after arriving. However, they have not presented any evidence to corroborate their claim and say that video cameras at the consulate were not recording at the time.

On Tuesday, Democratic Congressman Jim McGovern introduced a bill – co-sponsored by eight other lawmakers, including Dingell and two Republicans – calling on the US to ban weapon sales to Saudi Arabia unless the State Department reports that the Saudis were not responsible for what happened to Khashoggi.

On Wednesday, US Senator Dianne Feinstein spelled it out even more clearly: “If the White House continues to refuse to act, Congress must.”

Christopher Hill, a former US diplomat who served as the head of the US delegation for multilateral negotiations with North Korea in 2005 and as ambassador to Iraq in 2010, said while senators are speaking “very strongly” against Riyadh, the Trump administration would most likely oppose sanctions on Saudi Arabia.

“It will open up some more divisions between the senators and the administration,” he said.

“The Saudis are well aware that their pipeline to Washington doesn’t go through Capital Hill; it goes not only through the White House, but directly into the Oval Office,” he said.

Marcus Montgomery, a fellow at the Arab Center Washington DC, also said that lawmakers are not likely to outmuscle Trump on sanctions.

The White House can impose sanctions directly through the Treasury Department, but that is an unlikely scenario.

Meanwhile, leading members on the Senate’s Foreign Affairs Committee have triggered the Magnitsky Act, a US human rights law that compels the president to order an investigation into possible abuses. The law gives Trump 120 days to issue a report on the findings and impose appropriate measures.

But there is nothing to force Trump to impose sanctions, Montgomery said.

“So if Trump has this very, very shaky argument that, ‘Oh, the Saudi ruling family wasn’t directly involved, it was those low-level people’, [the administration] can actually refuse to impose sanctions on anybody of importance.”

That leaves Congress with two avenues to punish Riyadh, Montgomery said. It can vote down arms sales and military and intelligence assistance for the Saudi war in Yemen, or pass stand-alone legislation that Trump has the power to veto.

But given Trump’s pull with his party’s right-wing base, Montgomery said lawmakers may not have enough votes to pass such measures in the Republican-controlled House of Representatives and Senate.

The outrage members of Congress have shown since Khashoggi’s disappearance may also wane over time.

Montgomery said after the US midterm elections in November, the “appetite” to address Kashoggi’s disappearance in Congress will be faint.

“Politically, I am afraid that basically, the administration has the long-term goal of: ‘Let’s get this out of the news, get past November and see what happens,'” he said.

Hill, the former ambassador, said it is too early to tell, but the prospect of US sanctions on Saudi Arabia may depend on whether people believe the Saudis’ explanation that Khashoggi’s death was the result of a botched, unauthorized interrogation.

Still, Hill said: “I think this is probably ushering in a period of great instability in our relationship with Saudi Arabia.”

MEE reported last week that Riyadh is preparing to accept that Khashoggi died in the consulate, reversing initial statements insisting that the journalist left the building. But the Saudis would shield bin Salman from taking any of the blame, a Turkish source said at the time.

It also appears as though the Trump administration is accepting Saudi Arabia’s version of events.

On Monday, Trump suggested that “rogue killers” may have murdered the Washington Post columnist. Then, in an interview with Fox Business on Tuesday night, the US president said Salman and his crown prince’s possible involvement in the purported murder will be a “big factor” in how the US responds to the crisis.

“If they knew about it, that would be bad. If they didn’t know about it, bad things can happen,” Trump said.

After a visit to Saudi Arabia this week, US Secretary of State Mike Pompeo told reporters on Wednesday that the Saudi government has promised to hold anyone who may have been involved in the incident accountable.

“[The Saudis] told me they were going to conduct a thorough, complete, transparent investigation. They made a commitment, too, to hold anyone connected to any wrongdoing that may be found accountable for that, whether they are a senior officer or official,” Pompeo said.

Even if no sanctions are imposed, Hill said Khashoggi’s disappearance may jeopardize the White House’s plan to make Riyadh the “lynchpin” of US policy in the Middle East, including its peace plan in the Israeli-Palestinian conflict.

“If what we think happened indeed turns out to be what happened, I think it is really going to have a profound effect on the ability of the US to work with Saudi Arabia on these broader issues,” Hill told MEE.

The former ambassador, who is currently chief adviser to the chancellor in Global Engagement at the University of Denver, said the crisis may also affect Saudi-funded think-tanks and lobbyists in the US.

“There is a kind of deafening silence from many of these people. I’d be very curious to see how that shakes out,” he said.

On Tuesday night, the Washington Post’s editorial board hit out at Trump’s handling of the crisis and called on American businesses to “shun” Saudi Arabia.

“What should not be acceptable is a diplomatic cleanup operation conducted by the Trump administration for a regime and a ruler it has grossly indulged, despite its mounting excesses both at home and abroad,” the newspaper said. “Until the full truth about Mr. Khashoggi is disclosed, US businesses should shun the Saudi regime and Congress should block all military sales.”

A long list of US companies and business executive have boycotted a forthcoming Saudi investment conference scheduled for next week and are rethinking their relations with the Saudis over Khashoggi’s disappearance.

Related: Riyadh Threatens to Retaliate against Any Sanctions

Riyadh has come out strongly in denouncing the possibility of US sanctions. An unidentified Saudi official told the kingdom’s news agency SPA that Riyadh would retaliate with “greater action” against Washington.

Saudi commentator Turki Aldakhil, who is close to the royal court, also warned this week of an “economic disaster that would rock the entire world” if the US imposes sanctions on Riyadh. 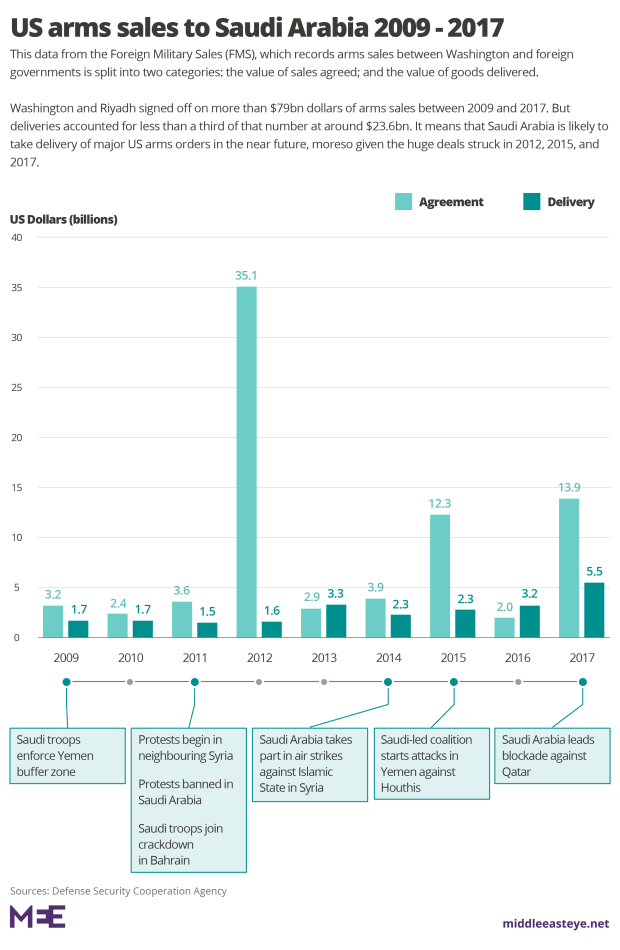 Trump has been particularly protective of the weapon deals with Saudi Arabia in his statements on Khashoggi, noting repeatedly that Riyadh may turn to Russia or China for arms.

“We’re not really hurting them; we’re hurting ourselves. So we want to be smart. I don’t want to give up $110bn order or whatever it is,” the US president said in the Fox Business interview.

Khan, the Wayne State University lecturer, described the notion that Saudi Arabia would abandon its weapon deals with the US as a “complete fallacy”, however.

He told MEE that US logistical support, spare parts, maintenance, and technical training are essential to the Saudi military.

“The idea that the Saudis could just, with impunity, reflexively go somewhere else really is outside the pale of reality.”

This post was written by Ali Harb and was originally published by Middle East Eye and appears here with permission.

Ali Harb is a writer based in Dearborn, Michigan. He reports on Arab-American issues, civil rights and politics.

This website uses cookies to improve your experience while you navigate through the website. Out of these, the cookies that are categorized as necessary are stored on your browser as they are essential for the working of basic functionalities of the website. We also use third-party cookies that help us analyze and understand how you use this website. These cookies will be stored in your browser only with your consent. You also have the option to opt-out of these cookies. But opting out of some of these cookies may affect your browsing experience.
Necessary Always Enabled

Any cookies that may not be particularly necessary for the website to function and is used specifically to collect user personal data via analytics, ads, other embedded contents are termed as non-necessary cookies. It is mandatory to procure user consent prior to running these cookies on your website.