Tel Aviv (MEE) – The companies leading the development of Israel’s offshore gas reserves have announced a deal that lifts one of the last major obstacles holding up the exportation of Israeli natural gas to Egypt.

Noble Energy and its Israeli partner Delek, along with Egyptian East Gas Company, bought a 39 percent stake in East Mediterranean Gas (EMG), the company which controls the only pipeline running between Israel and Egypt.

Announced on Thursday, the purchase totals $518m, with Noble and Delek paying $185m and the rest – $333m – paid for by Egyptian East Gas, according to documents filed by Delek with the Tel Aviv Stock Exchange.

With control of the pipeline, Delek said that gas from Israel’s Tamar and Leviathan reservoirs could be transported to Egypt as early as next year, the start of the 10-year, $15bn deal signed in February between Delek, Noble and the private Egyptian company Dolphinus Holdings.

“This is the most significant milestone for the Israeli gas market since the discoveries,” Delek CEO Yossi Abu said in a statement.

“The Leviathan reservoir is becoming the Mediterranean Basin’s primary energy anchor, with customers in Israel, Egypt, and Jordan.”

The deal is a major win for the Israeli gas industry which, as a result of both political and economic challenges, has struggled to sell its discoveries.

The first field – Tamar – was found in 2009, followed in 2010 by Leviathan, one of the largest global discoveries this century.

But nearly a decade later, only Tamar produces gas for commercial consumption, supplying nearly all of Israel’s gas and also exporting to Jordan’s state-owned Arab Potash Company and its affiliate, Jordan Bromine Company.

As time has passed, the list of potential customers in the Mediterranean has shortened as Egypt and Cyprus have made major gas discoveries of their own. 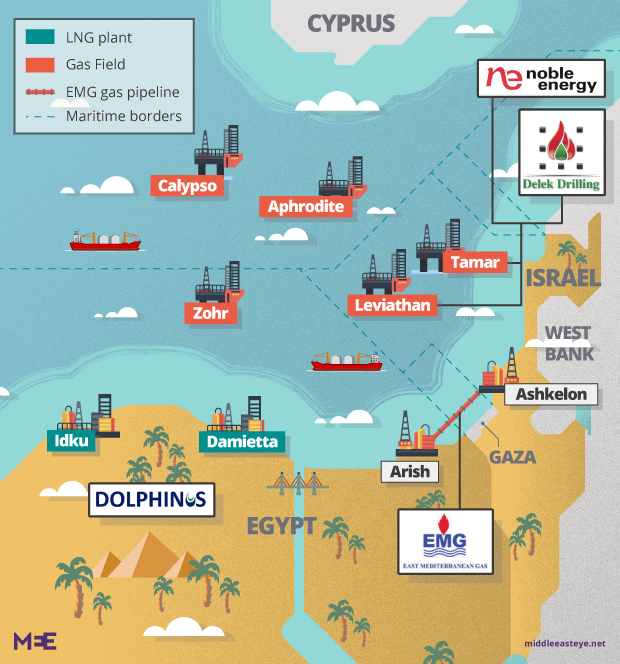 Pressure on the Israeli market was kicked up a notch last week with the announcement that Cyprus and Egypt had signed an agreement to construct a pipeline to Egypt’s liquefied natural gas (LNG) facilities, paving the way for Cypriot gas exports – and competition for Israel.

“The Leviathan partners are kind of desperate to find ways to sell any of their gas,” David Butter, Middle East and North Africa programme associate fellow at Chatham House, told Middle East Eye on Thursday.

“Also I think that they want to get moving so that they can have their gas in play before any gas can come down the line from Cyprus.”

But there has also been pressure for a fast deal as Egypt edges towards energy self-sufficiency following several years of having to import expensive liquefied natural gas (LNG) after political instability and energy sector mismanagement left it without its own gas.

Elai Rettig, a research fellow at the Tel Aviv-based Institute for National Security Studies, told MEE earlier this year: “At least on paper, there is no necessity for Israeli gas anymore.” 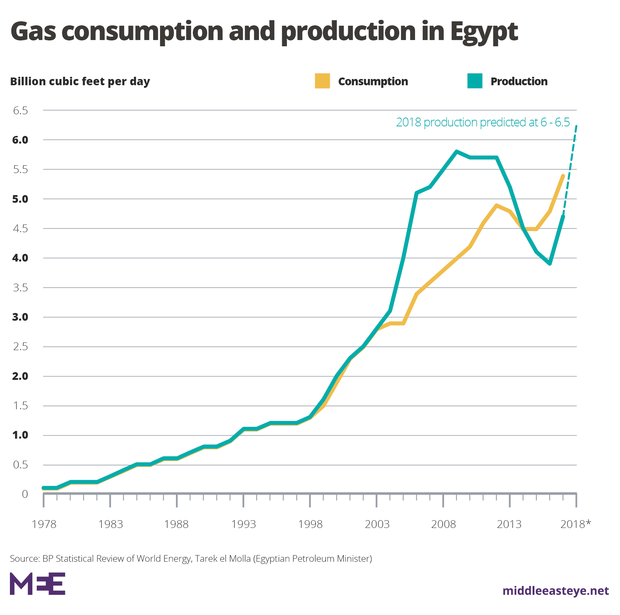 In fact, the deal will reverse the historic direction of gas flow between the two countries: starting in the early 2000s, Egypt was a net exporter of gas and provided 40 percent of Israel’s natural gas at some of the lowest prices in the world.

That deal was made between two state-run Egyptian companies and EMG, whose partners included former Israeli intelligence agent and energy tycoon Yossi Maiman and American billionaire investor Sam Zell – and is the same company in which Delek, Noble, and the Egyptian East Gas Company are now buying the 39-percent stake.

But by 2012, with repeated attacks on the gas pipeline in Sinai and an inability to meet the demand of a rising population experiencing regular blackouts, Egypt canceled the deal, setting off billions of dollars in arbitration cases filed by the Israeli Electric Company and partners in EMG.

Now, according to Thursday’s filing and press material from Delek, the EMG shareholders which Delek, Noble, and Egyptian East Gas have bought out – including Zell and Maiman – have agreed to waive all claims, clearing another hurdle that was holding up the deal.

Given Egypt’s nearing energy self-sufficiency, most analysts have speculated that the Israeli gas will be liquefied in one of Egypt’s two liquefaction plants and re-exported, giving the state and companies involved profits from tolls and transit fees.

This post was originally written by Dania Akkad and was published by Middle East Eye and appears here with permission. Accompanying photos, unless noted, also belong to Middle East Eye.